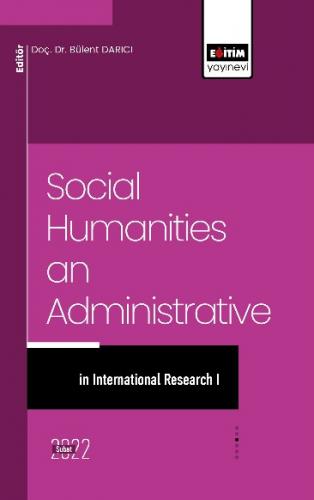 Social Humanities and Administrative in International Research I

Scientific publications and academic studies in particular can be considered as opening the door to a better life. The diversity of academic studies is almost a richness offered to the welfare of the society. The future, which is tried to be built thanks to the accumulation of academic studies, to understand the age and to the projections prepared for the coming years, of course, makes life much more understandable.

All these efforts to reach an advanced level of life are due to the difficulties and hardships that must be undertaken in the production of academic studies that appear on the other side of the coin. On the other hand, it is thought that the difficulty of the studies produced in the field of social sciences is more than the fields of science and engineering. These difficulties are; As a result of the previous corpus that needs to be reviewed and the readings that need to be made for years, it is revealed as a droplet filtered from the retort, thanks to the necessary research and knowledge.

This work, which we hold in our hands, was built by filtering the accumulation of valuable academicians, like a note left in history. There are six valuable studies in this very valuable publication called “International Research in Social, Human and Administrative Sciences”. Considering the richness of the field of Social Sciences, the scope of the work has been covered in a wide range. It is obvious that this work, which was created thanks to very valuable academicians from Turkey’s most valuable universities, fills a great academic gap.