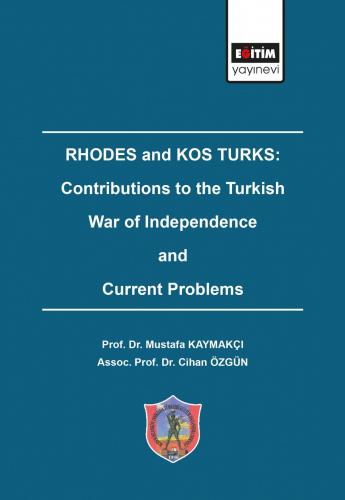 Rhodes and Kos Turks: Contributions to the Turkish War of Independence and Current Problems

Turks living in Rhodes and Kos(İstanköy)today have been one of the ancient peoples of the islands since 1522. Finally, the Islands were ceded to Greece with the 1947 Conference of Paris by stipulating in Article l4 that "these islands shall be and remain demilitarized".

With the ceding of the islands to Greece, the dramatic condition of the Rhodes and Kos(İstanköy)Turks became increasingly more intolerable.

However, the link between the Turks of the island and Turkey, in terms of Awareness of Turkishness and Solidarity as well as socio-economic terms with Turkey, was also a prevalent issue in the past as it is today.

In fact, Rhodes and Kos(İstanköy)Turks did not hesitate to extend their support to the National Campaign (Milli Müdafaa), both directly and indirectly, while the Turks fought against the Greek forces under the command of Mustafa Kemal Pasha in Anatolia. They tried to provide contribution to the campaign with the “Rhodes and Kos(İstanköy)Association for the Defense of Islamic Rights” (Rodos ve İstanköy Müdafaa-i Hukuk-I İslamiye Cemiyeti) in 1919.

This book consists of three consecutive sections. The first section covers the “Contributions of Rhodes and Kos(İstanköy)Turks to the Turkish War of Independence”. In the second section, on the other hand, the subject of “The Current Problems of the Rhodes and Kos Turks Stemming from the Turkish-Greek Relations as Regards the Aegean Sea” was addressed. In the third section, the subject of “Recommendations for Transforming Turkish-Greek Relations into a Lasting Friendship” was addressed on a general level and in terms of Rhodes and Kos (İstanköy)Turkishness.

Thus, we wished to bring the current problems experienced by the Turks regarding the Turkish-Greek relations into the agenda of the national and international public by establishing a connection with the history of the remaining Turks in the islands.